The digital goods landscape is as diverse as it gets, so dGoods provide a flexible and comprehensive standard that could address a diverse range of digital item requirements.

Multiple categorized tokens in one contract¶

In a world where digital goods will be a major commodity, being able easily and efficiently manage large quantities of items is critical. Other token standards have one token with one contract. If a developer wants to issue different types of tokens, it has to be done through multiple contracts. This not only increases complexity but also cost.

To address this, the dGoods standard implements a hierarchical naming structure, which has one token symbol per contract but allows the creation of many sub-tokens. 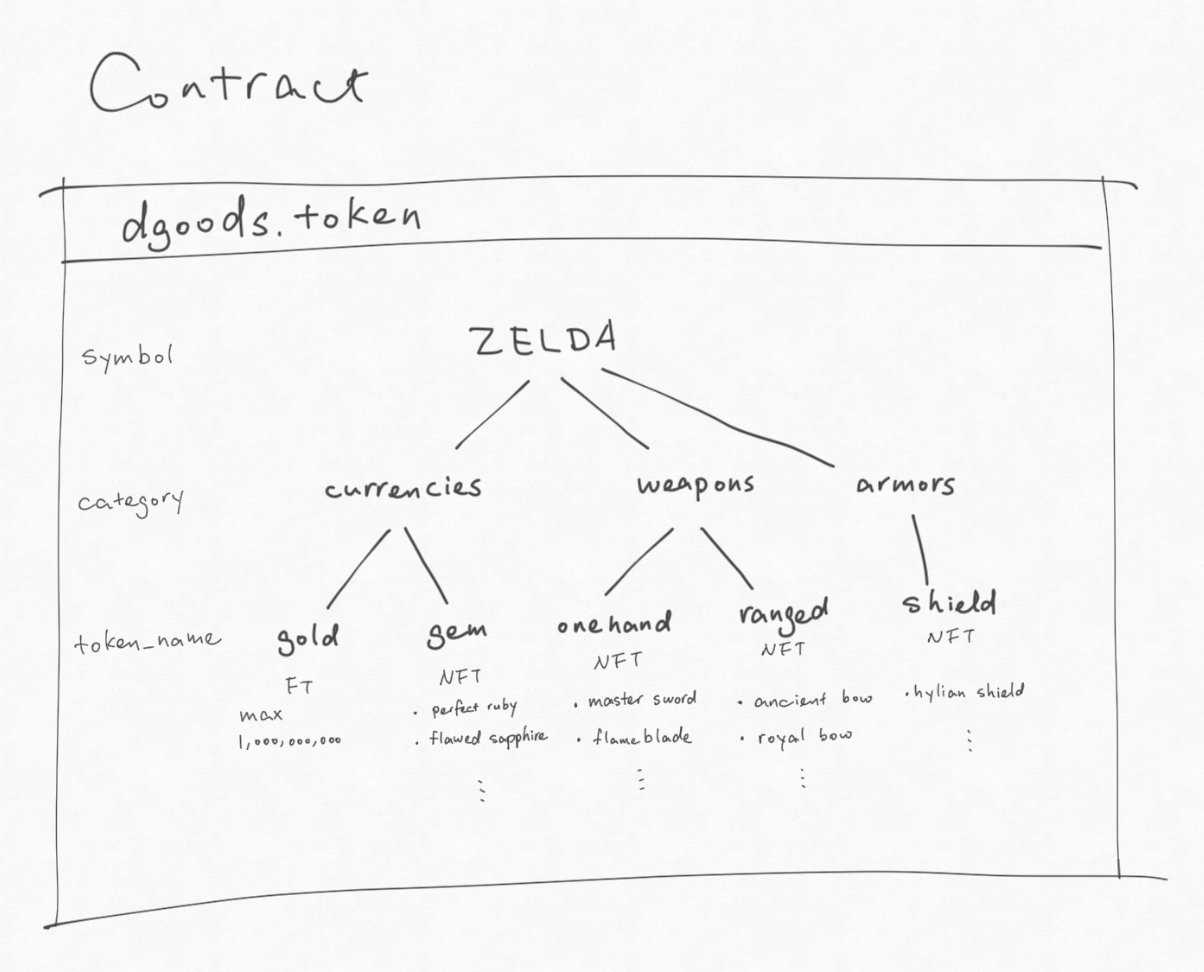 Each sub-token can be assigned a category, a token name, and tags which will allow wallets, exchanges and dApps to organize, filter, and display tokenized assets with ease. All of this can then be packed into one single transaction, allowing for developers and users to move groups of tokens around quickly and efficiently.

Fungible tokens refers to tokens which are interchangeable like EOS itself. When tokens are fungible, each of their individual units are equivalent and they are indistinguishable among themselves.

NFTs can be used to represent in-game assets that are controlled by the user instead of the game developer. This lets the assets be traded on third-party marketplaces without permission from the game developer. NFTs also find potential use in digital art, by helping prove authenticity and ownership.

Semi-fungible tokens are technically unique in that they have a unique identifier, but may share the same or similar data to other tokens. Many physical goods would fall into this category as they have a unique serial number but otherwise are indistinguishable.

As a standard for tokenized digital goods, a single focus on NFT standards was not enough. A game or company will want to create many different tokens, some of them being fungible or semi-fungible while others being non-fungible. Since the dGoods standard has the benefit of defining sub-tokens within one contract, it gives developers the freedom to make some of them fungible and others non-fungible.

Fungible tokens are identified by category:token_name and NFTs have an extra token id associated. This allows for unprecedented organization of tokens. It also enables wallets and dApps to surface tokens by category or name, providing search and filtering functionality.

True ownership is at the heart of the new player-owned economy that’s emerging from blockchain technology. With the certificate of authenticity, we provide developers an additional way to integrate proof of ownership into their tokenized digital goods.

Like with physical real-world objects, digital objects need a certificate of authenticity. In order to support a thriving economy of digital goods, it’s critical we give consumers confidence in their purchases. Built into dGoods is the ability to have immutable fields describing the object’s attributes that make up the certificate of authenticity. This will also allow developers to display a graphical representation to consumers as proof of the item’s attributes including things like its brand, creator, or rarity.

Part of the dGoods standard involves specifying templates for metadata depending upon the type of digital good you’re working with. If the token is for a game, coupon, ticket, music file, piece of art, etc., standard templates can be created so that wallets will be able to render and display the relevant information, images, and even 3d objects. This allows for a wide array of digital asset types to be supported while providing the development community a flexible toolset to work with.

One of the biggest features of dgoods is the built-in exchange.

The dGoods standard is an open and free standard initially for the EOS development community but is open for other blockchains to adopt. The standard will roll out first on the EOS mainnet. No other tokens are required to use the standard. dGoods looks leverage the strengths of blockchain, capitalizing on concepts like verifiable scarcity, and allowing for the emergence of thriving embedded secondary marketplaces.